Here’s What I Got Up To In New Orleans ft. Mardi-Gras

New Orleans. NOLA. Crescent City. The Big Easy. An amazing city referred to by many names and one that has to be experienced by all at least once in life. New Orleans is known for its nightlife, music, carnivals, festivals, European architecture, unique food and culture. The city has a mixture of cultural influences from Spain and France (due to colonial rule back in the day) as well as influences from West Africa and the Caribbean which makes it so unique. You simply cannot find another city like it in the whole of the U.S.

I knew I loved New Orleans before the soles of my feet touched the tarmac at Louis Armstrong International Airport. Mind you I had never visited the city before this trip, but I was already sold. From watching Princess and The Frog to reading endless amounts of travel blogs – I just knew this city was for me. I also experienced this city during Mardi Gras season and it was unforgettable. After my solo trip, there was no way I wasn’t going to share the in’s and out’s of my trip.

I decided to stay at The Quisby Hostel because it was pretty cheap (and I just love staying at hostels). The hostel offers both shared-dorms and private-rooms – whilst they do not have a restaurant they do have a 24-hour bar and hosts various food vendors/trucks to feed their lodgers during the week (not free of course). The hostel is situated on St Charles Avenue and is conveniently located by the St Charles Streetcar stop which gets you to French Quarter in 10-15 minutes.

Good for solo travellers? Not entirely. The hostel didn’t have much activities on or any group tours. The only other way to meet new people was in your room if you opted for a shared dorm. This could have changed now as I visited in 2018.

Price: $209 in total for a 4-bed female dorm with en-suite (4 nights). The price per night gradually increased the closer it got to Mardi Gras – however it was still a great bargain compared to the other accommodations I saw.

Other Areas To Stay

French Quarter – The historic ‘heart’ of NOLA where everything goes down! French Quarter is known for it’s buzzing nightlife, street performances, jazz bars and restaurants.

Central Business District – is New Orleans ‘downtown’ and business hub with many offices and high-rise buildings. The district also has a vast number of hotels (on the pricier side), restaurants, and attractions.

Where To Eat & Drink

You’ll be pleased to know that New Orleans is a culinary city known for it’s unique dishes, the place is a foodies paradise! Their cuisine is found to have influences from Native Americans, Spain, France & West Africa. When in New Orleans check out the restaurants below:

Things To Do & See 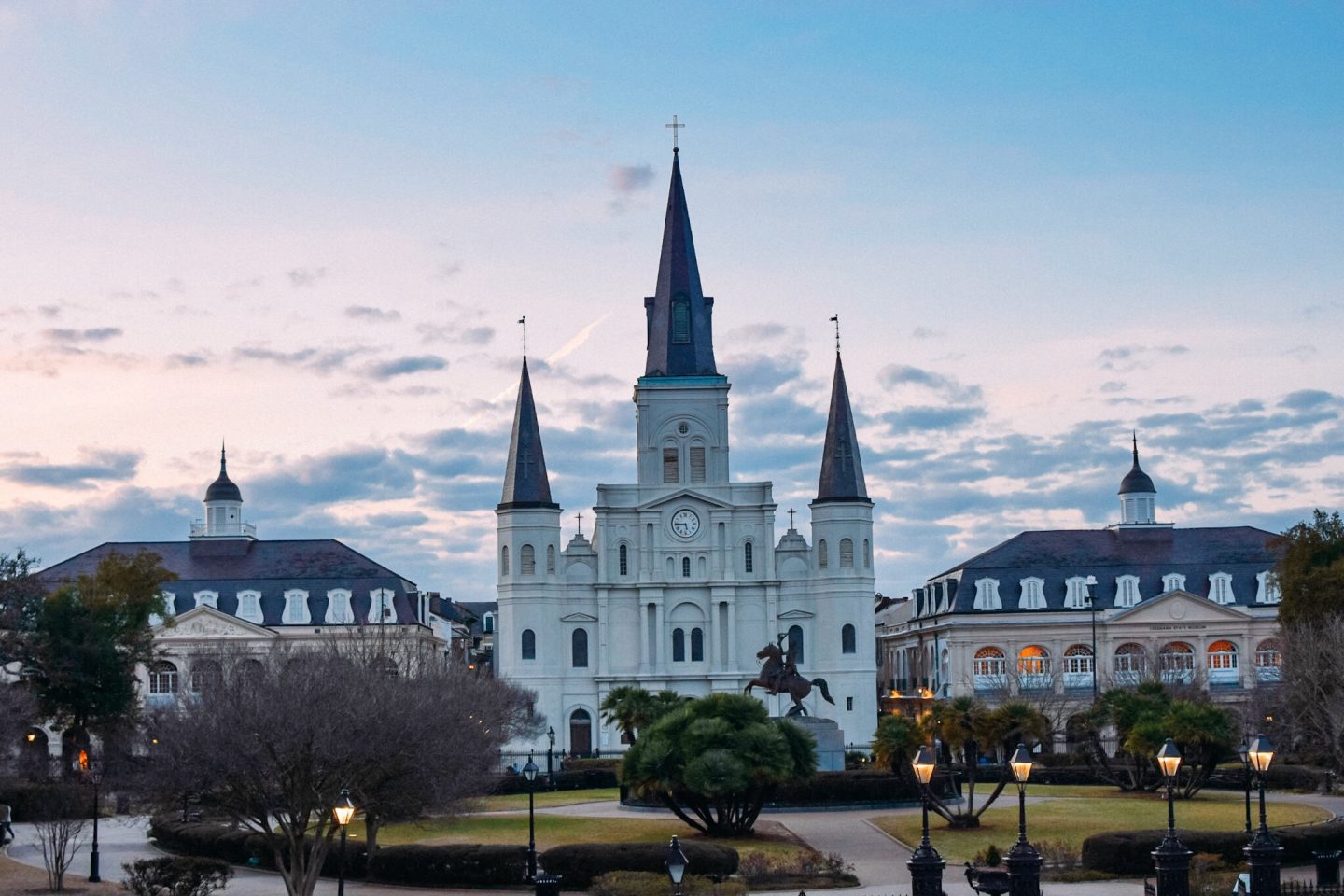 French Quarter – is the historic heart of the city and so full of character! Here are a few places you should visit in the French Quarter:

Garden District – Is an affluent district in NOLA where the streets are lined with the grandest oak trees and extravagant historic mansions. The Garden District also made an appearance in Champagne Papi’s ‘In My Feelings’ music video, where he is seen pouring his heart out to dear Kiki from the gates of her mansion. 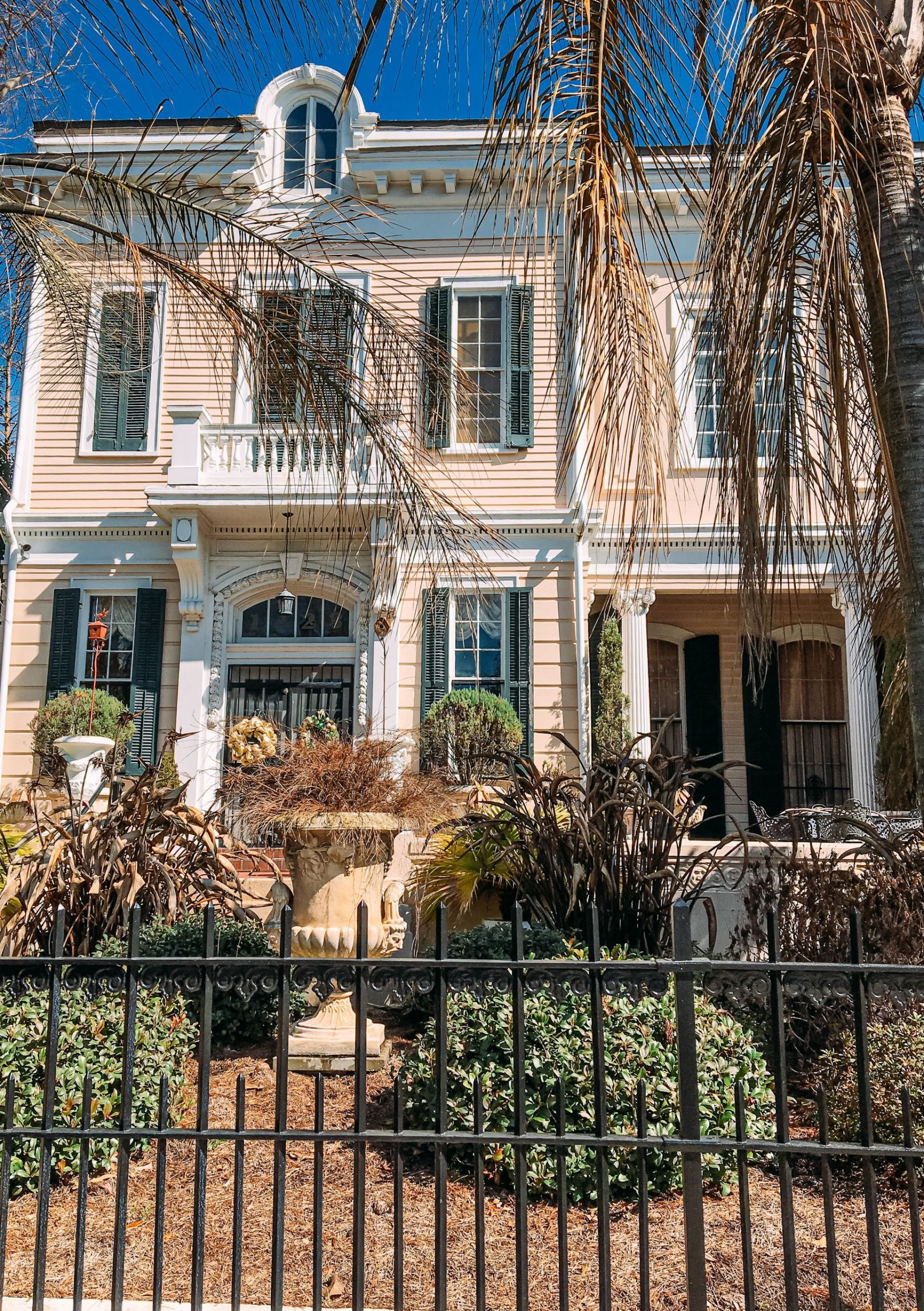 Treme  – One of the cities oldest black neighbourhood. This neighbourhood is home to a number of soul-food joints and the most colourful cottages. Whilst you are in Treme make sure you visit Louis Armstrong Park and Congo Square – at the square slaves would gather together every Sunday to sing, dance, and sell items amongst themselves.  (I went on a tour with “Free Tours By Foot” to explore Treme so I could learn about the neighbourhood and history) 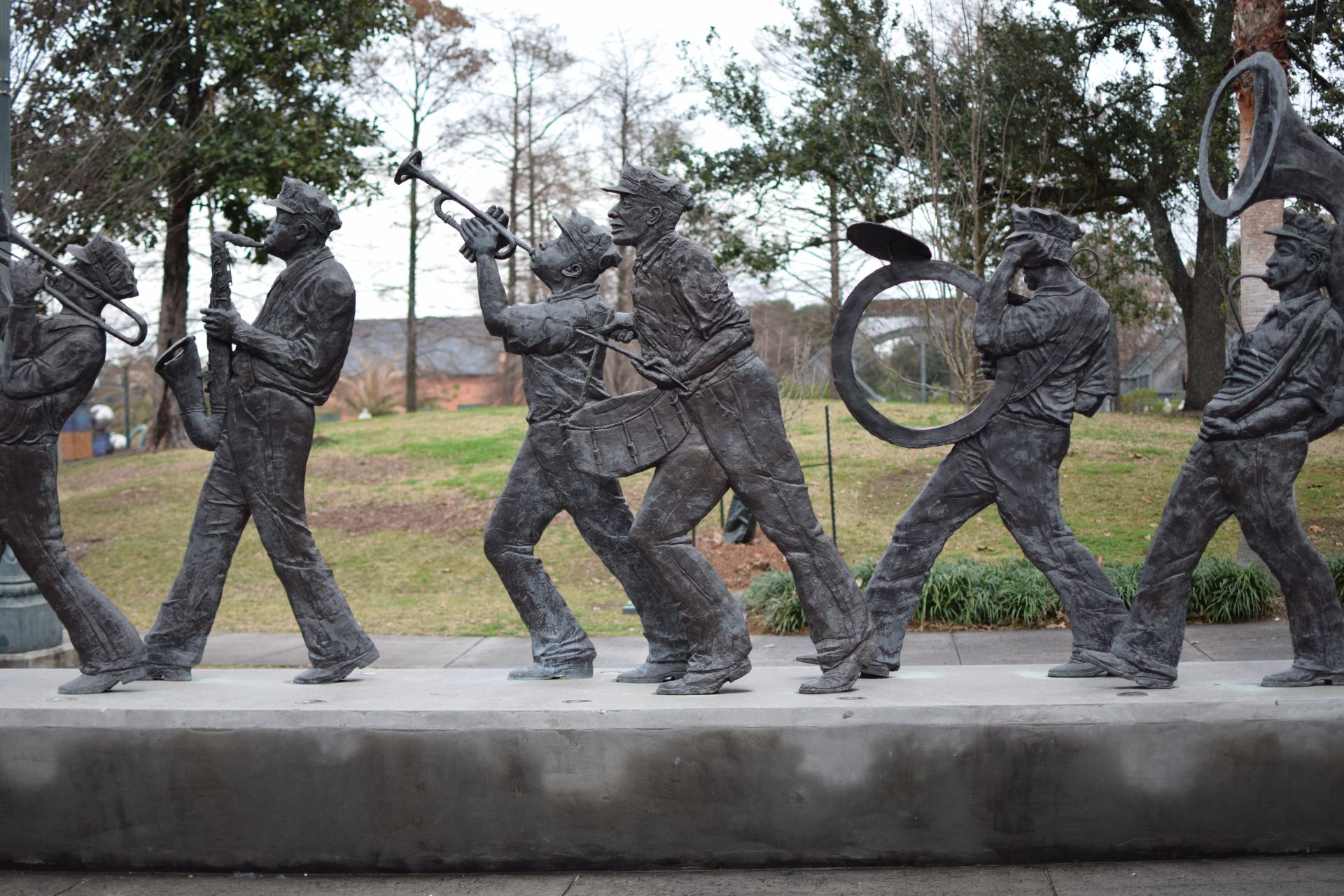 Take a swamp tour – Ride on a boat through the swamps of New Orleans learning about the culture, the swamp and inhabitants (whilst also spotting swamp animals inc Alligators, Boars, Turtles and other wildlife).
Frenchman Street – Here you’ll find a variety of Jazz bars and live music performances.

Festivals – Festivals happen in New Orleans every season from Fall to Summer. There are a variety of festivals to attend including food & drink festivals, cultural festivals, music festivals. 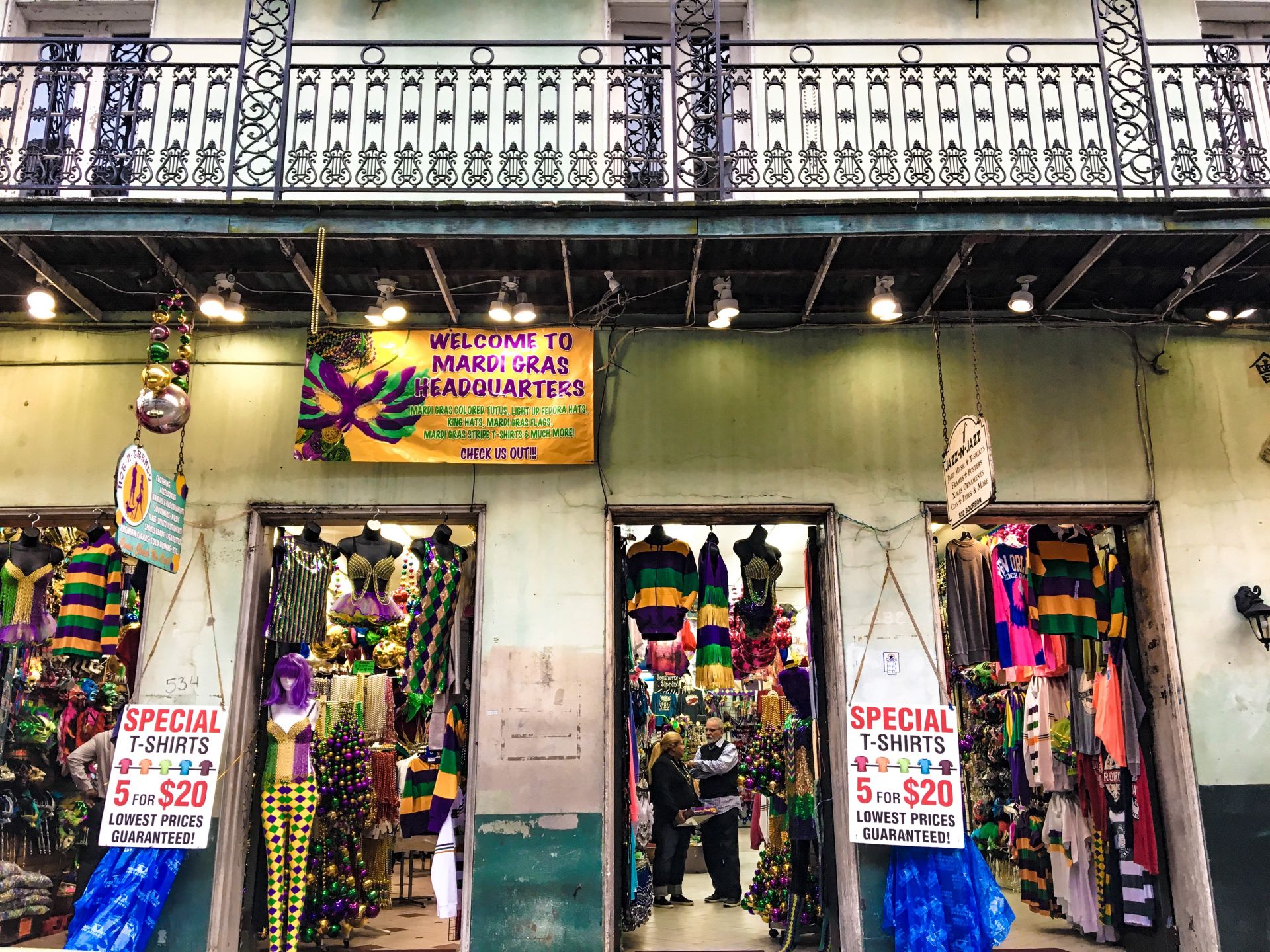 Essence Festival is one of the largest African-American music and cultural festival in the states and is not to be missed!

I made sure to be in New Orleans during one of their most important times of the year – Carnival Season A.K.A Mardi Gras A.K.A “The Greatest Free Show on Earth”. Mardi Gras celebrations is one of the events which is heavily associated with New Orleans culture, it attracts thousands of people from all over the world. Mardi Gras was always on my travel bucket list and till this day I’m so glad I was able to experience this!

Mardi Gras means ‘Fat Tuesday’ in French and every year from the January 6th (Twelfth night) all the way through to Fat Tuesday (Shrove Tuesday) locals and tourists celebrate the season of Carnival with amazing events, parades, concerts, balls and shows. The last of the Mardi Gras celebrations happen on Fat Tuesday, as the following day (Ash Wednesday) marks the start of fasting during the Lentern Season leading up to Easter.

On the days leading up to Mardi Gras there were many parades happening all over town – it was so colourful and vibrant. Each float represents different Krewes which are formed and organized by social clubs. The thing I looked forward to the most was Mardi Gras “throws” – which is anything that is thrown from the floats. Throws could be colourful beads, sunglasses, key chains, coins, cups and much more. To ensure you get as many throws as you can there is a lot of shouting “over here!” and waving your hands in the air.

I watched the majority of the parades from the doorstep of my hostel which was located right on St Charles Avenue. If any of you Londoners are reading, this was equivalent to sitting on the doorsteps of one of the houses on Ladbroke Grove during Notting Hill carnival! I also went down to Bourbon Street whilst some of the parades were taking place and it was FULL OF LIFE. The streets were packed, beads were being thrown from the balconies, the sounds of street jazz in the background combined with music from speakers and loads of horns. It can’t be described but only experienced.

1. The history behind Mardi Gras Masks were so wearers could escape class discrimination. By wearing a mask, carnival goers were able to socialise with whatever class they desired without negatively affecting their reputation.

2. There is an official food which represents Mardi Gras called a King Cake. The cake is usually oval and has a colourful glazing matching the official Mardi Gras colours (Green, Purple and Gold). A plastic baby is hidden in the cake and whoever finds it buys the next king cake!

Yes. Yes. And YES! If you are looking for the textbook definition of “Southern Hospitality”, New Orleans is where you will find it. Southern Hospitality is commonly used to describe the stereotypical acts of kindness from people residing in the South as they are typically known to be welcoming and hospitable.

The residents of New Orleans showed me love from the moment I landed at Louis Armstrong International Airport. The locals have so much love for their city and didn’t hesitate to show me their reasons why. Whenever I got into an Uber or walked into a shop, I was flooded with recommendations on restaurants to eat and places of interests – on one occasion I had an Uber driver give me an unplanned mini tour and history lesson of New Orleans (with my permission of course).

During my trip I never encountered any situations where I was left anxious or fearful – it was purely great vibes through and through. At the time of my visit it was Carnival season which meant security was always in place and all the carnival-goers were there for a good time so I felt at ease.

Want more proof? Check out my post where I share My Top 3 Travel Highlights in New Orleans

A 20 something year old who uses all her money to buy food and travel the world.... jk I save SOME of money as that is what adulting is all about right? 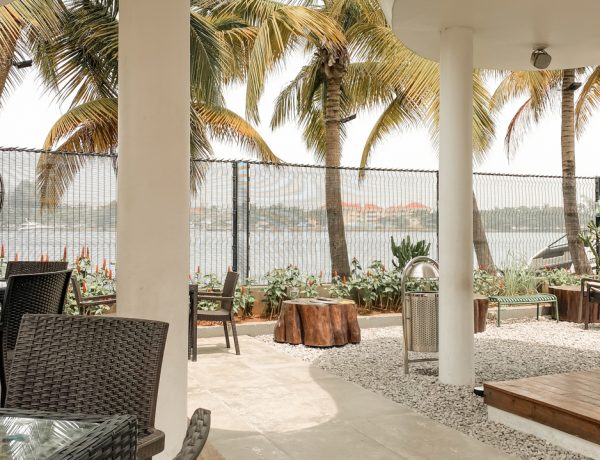 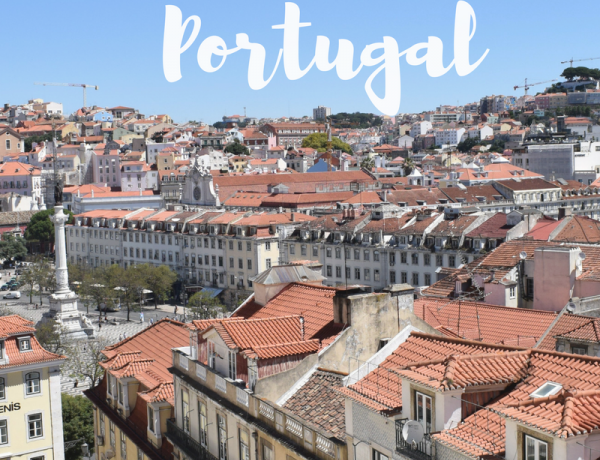 The Palateport’s Guide to Lisbon 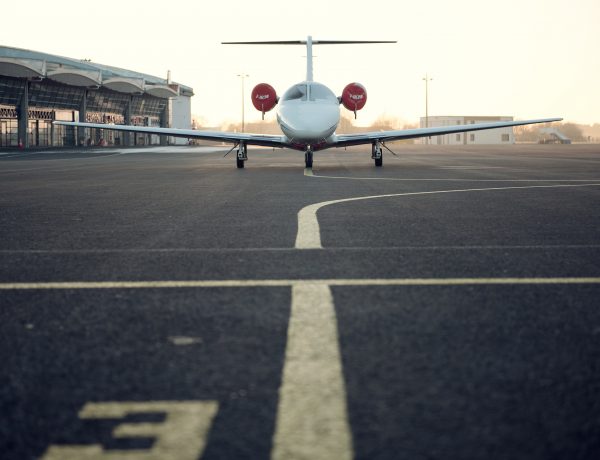 5 Things To Know Before Taking Your Stopover Flight

This error message is only visible to WordPress admins

There has been a problem with your Instagram Feed.
Error: No posts found.